← more from
Sonic Robots Records
Get fresh music recommendations delivered to your inbox every Friday.
We've updated our Terms of Use. You can review the changes here. 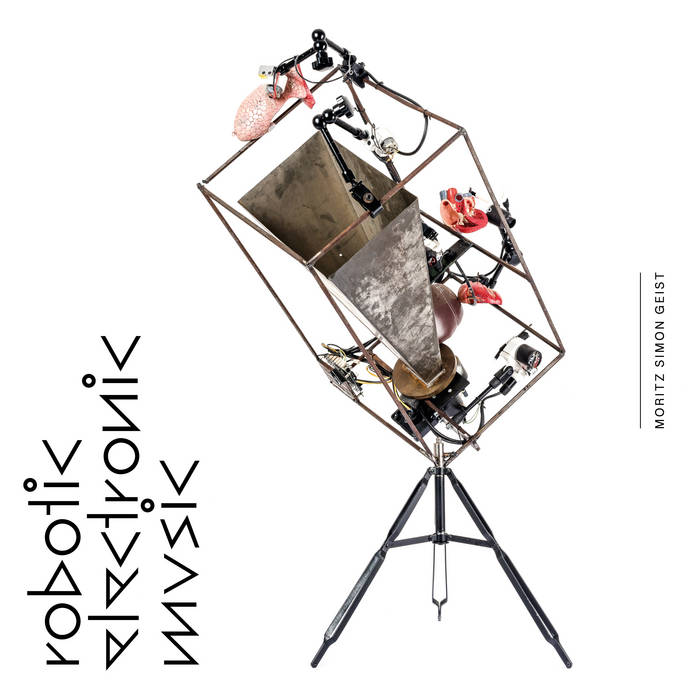 Moritz Simon Geist, media artist and robotic musician, publishes his first record. It is the world's first techno record played entirely by self-made futuristic robots. All of the sounds on his records are played by robots: small motors that beat on metal, futuristic 3D-printed robo-kalimbas, salvaged parts from old hard drives that click and cut. It took Geist several years to build, tweak, test and play all his DIY robotic instruments. His 'Sonic Robots' try to push the boundaries of the imaginable. He did so already in 2012 with his well-known oversized 808 robot - an iconic drum machine gotten real, 4 by 2 meter, filled with robotic parts which play the instruments live and in front of the audience. Now, Moritz Simon Geist goes even further to discover the unknown and futuristic world of techno robotics. For this quest he teamed up with the berlinian sound wizards from Mouse On Mars and dug deep in the history of mechanical music and experiments of early electronic music. On the Album "Robotic Electronic Music" Moritz Simon Geist extends the futuristic approach to music making he introduced in his first EP. The opener "Entropy" could already be found on his EP, a bassy club-track, played by robotic kalimbas, a psychedelic pattern of tonal glasses and pneumatic hi-hat patterns. It is also featured in the main video, but even without a visual part, listening to his music, a sound world opens up which is unheard before: in definition, reference and organic nature. Geist: "When you listen to robots playing, you realize, that they sound precise, but in contrast to digital sounds they transport an immense organic feeling. No beat is like the other, everything is played with actual acoustic physicality and thus actual error. On the same time, the repetitive nature of the robots make it perfect for playing electronic music. Its industrial and organic at the same time." The track "The DNA of Drumming" explores the combination of ritual drumming and robots. Moritz Simon Geist took several tuned drums and let robotic actuators play rhythms, combining everything to a reduced slow stomper that slowly moves in a hypnotic manner. "In G# (Katze läuft über Klavier)" is a direct reference to Terry Riley's "In C". The song starts with a robot hammering on prepared piano strings, being slowly filled with robotic marimbas, glasses, robotic shakert robots and Moritz' own invention, and mechanic relay synthesizer, which plays notes and melodies with mechanic tongues. It's the warmest song on the album and the only one featuring stronger melodic movements.

What Moritz Simon Geist came up with is a stunning record of what is possible today - to explore the sound of mechanics that keeps on filling our world. Geist creates a smashing soundtrack for both the precise automation and physical fragility that shapes today's society.

Bandcamp Daily  your guide to the world of Bandcamp